Mobile devices are changing the way you manage your mobile engineers

Over the last 4 years we've seen a huge change in the way in which we utilise technology.  We've swapped our PC's in for mobiles and tablets, especially useful for mobile engineers.  We first bought these devices as consumers, purchasing games, shopping apps and Facebook.  We then started looking to them to improve our businesses.  Commusoft has always been at the forefront of the mobile race and chose to invest early on in iPhone, iPad and Android.  The problem was though, it was an afterthought.

Commusoft was first built 9 years ago when smartphones and tablets didn't exist. The problem is that although we built mobile applications, we built them after the main application was designed.

Commusoft’s upgrade is about to change all of that
We built and designed computer, mobile and tablet applications all at the same time.  We decided that mobile was no longer a second rate citizen and required all the same features that the computer system had.

We're proud to announce that Commusoft now support iPhone, iPad, Android and Android tablet applications and provide most of all the functionality that the computer system does.  Tablet applications will give you control and access to multiple engineers diaries, while the phone application gives your mobile engineers access to estimates and jobs while in the move.

You can now truly run your business from a mobile device 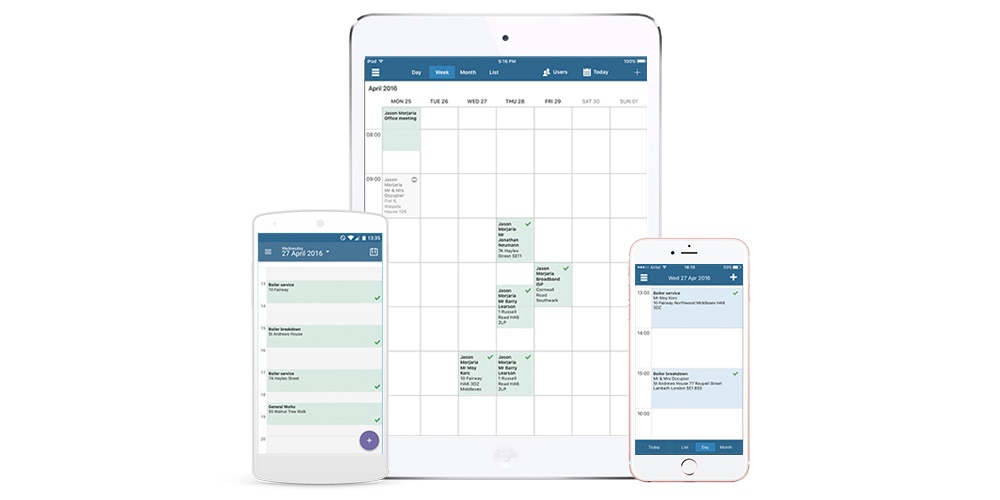 We've targeted the mobile applications at everyone from sole traders to large organisations with hundreds of users. The same security system which governs the computer system now controls and governs the mobile application giving you peace of mind for small businesses while allowing larger enterprises to have incredible control over the access office, mobile engineers and salespeople have to data.

Like the rest of this huge upgrade, Commusoft have been listening to it's clients.  We have had hundreds of feature suggestions and requests.

These are just a small number of some of the requests we received
When we first started looking at what the mobile application should do, we had a basic ‘idea’.  The aim was to let a user add and edit information on their PC, pick-up their phone and have all the information they had just added and changed already available to them, without having to hit sync and without having to wait.  This was a pretty aggressive goal.  We’d never seen it done before in any other applications.  Most mobile applications, especially applications for engineers always had buttons to sync information, blocking the user from access the software and causing them delays.

Our CTO Raja got to work and started investigating how we could achieve this.  We spent over a year just doing research and development.  We experimented with dozens of approaches.  We eventually came up with a real-time, background synchronisation technology which we’d seen used on powerful servers/computers, but never on mobile devices.  We got to work and soon had a really interesting prototype, showing off this near-real-time data synchronisation.

To get an idea of how fast this works, check-out the below video.  This video shows our web application on the left and an iPhone on the right.  We’ve plugged in an iPhone into the computer and ‘mirrored’ it onto the screen in order to create the video.

As you can see, it’s fast.  Seriously fast.

Not only is it fast, but the customer, estimate and job details are all stored on the device allowing the engineer to use the application whether they have a strong 3G/4G signal, a poor 2G signal or no signal at all.  The mobile engineer will never get blocked by poor or no internet connection.  This opens up mobile working to not just those companies based in urban environments with solid phone signal, but companies who work in rural environments that often don’t have signal.

Offline capabilities
Offline is critical.  Engineers don’t want to be hassled by lost internet, poor internet or a lack of information.  Commusoft’s updated mobile applications for plumbing, heating, gas, oil and electrical companies is designed to work completely offline.  Engineers receive notifications when new jobs have been booked for them, allowing them to simply open their mobile application to see the job details, customer details, notes, contact details, job history.

Once the notification has been sent and received (they need internet at least to receive the job!) the details are stored entirely on the device.  This allows the engineer to work in anywhere that there isn’t signal, basements, under boilers or in the countryside.

If the engineer is offline and has used the application, the information will seamlessly upload in the background when internet returns.  There are no more sync buttons!

Multiple diary views on phone and tablet
The diary is an integral part of the mobile.  Engineers, managers and office staff use it every day.  It was therefore important for us to invest heavily in improving the experience by adding a number of new views.  On the mobile we now have a daily, monthly and list view while on the tablet we have a daily, weekly, monthly and list view.

The tablet application gives the user access to all your engineers diary (based on security permissions).  This means a manager of office person (or even a girlfriend/wife) can download the application on their iPad or Android tablet and they can access all the engineers diaries, receive real-time information on the status of the job along with re-arrange appointments when their out and about.

GPS routing - helping your engineers get to site on-time
Another heavily requested feature has been GPS integration, allowing engineers to tap on the address/postcode and have Commusoft route the engineer to the job.  With a single tap, Commusoft now opens Google maps and directs the engineer.

Access to more detailed information
The more information engineers have, the better they can do their job.  Having access to job history, previous engineer job reports, previous certificates, photos etc all let the engineer understand, diagnose and manage the job better.  Commusoft’s upgraded iPhone, iPad, Android phone and Android tablet applications give the engineer access to all the information they could ever need.

Simple improvements we’ve made include giving the user access to the estate agents address, telephone number and email addresses.

Improved feedback
When a company first starts to use mobile software, they’re main goals are to just digitally send information to engineers and get basic feedback relating to what was done on site, what parts are needed/installed.  After a while though most companies start looking to customise the engineer experience further, looking for more and more specific feedback from engineers.  Whether that be information on whether the engineer paid for parking, a confirmation that the engineer completed their site safety checks or HSE forms.

A major improvement we’ve made is to the engineers job report.  It’s now possible to setup a set of questions that you want your engineers to complete before they leave site.  It’s incredibly powerful as if you want simple feedback from an engineer, then you can keep the default setup the Commusoft provide, if you want to customise it to your requirements, then you can do and it’s immediately reflected on the engineers mobile.

The other major improvement we’ve made is to change the basic work-flow for engineers when leaving site.  The previous application had three main buttons, Leave, Complete and Abort.  Clicking Leave or Complete prompted the user to type in what they’d done on site.  The problem with this process was engineers needed to remember what they had done and update their notes only when they where leaving.  The new Commusoft mobile application allows the engineer to fill in the job report at any point after arriving on-site.  Engineers can tap into the job report, fill in part of it, save it and do something else and return later on to the job report to complete it.  This new process makes it more friendly and closer to the standard work-flow of most engineers.  The engineer needs to fill out the job report before leaving site.  Commusoft intelligently determines whether anymore work is required before letting the engineer mark the job as complete (i.e. there is no to do or future diary events on the job) then it prompts the engineer with the question ‘Is the job complete?’.  If the engineer marks the job as complete a notification is sent to the office team prompting them to invoice the job.

This simplified work-flow should be easier for engineers to learn and understand, reducing training costs for companies and better suiting engineers work-flow, reducing engineers complaining about using technology.

Arrive signatures
Commusoft’s new upgrade brings all of this flexibility while keeping it simple for the engineer.  Customisable arrival questions, allowing the engineer to fill in a set of pre-defined questions when they arrive on site, particularly useful when asking engineers to complete a set of safety questions before he starts work.

Completing certificates have changed significantly
Certificates have always been a critical feature.  Many of our clients completed Domestic Gas Safety Certificates on a daily basis.  Commusoft have had a lot of feedback around how we could improve this process and are pleased to share now a number of key improvements which we think will dramatically change the way your business manages these documents.

Firstly, certificates can be partially created, saved as a draft and returned to later.  This means engineers aren’t forced to complete a certificate in one go.

Secondly, certificate are saved as drafts after every page is saved.  This information is then synced with the server.  This process allows office staff to view and monitor draft certificates as they are created, reducing the risk of engineers partially completing a certificate, but not saving it (and therefore loosing the information).

Thirdly, if there has been a mistake on a certificate, the engineer is now able to clone a certificate (copying all of the details on the original certificate into a new draft certificate), fix the problem and re-sign the certificate quickly and easily.

Improvements to emailing certificate and printing from site
Certificates can be previewed at any point during the creation processes.  This lets you show the customer/tenant what the certificate looks like prior to them signing the certificate.  Once the certificate is complete, engineers can email to one or more email addresses as well as print or print and post the certificate straight from their mobile device.

Filling in estimates
Managing estimates on our mobile application has always been limited.  Commusoft’s upgrade changes that by allowing engineers and sales people to fill in estimates from their phone and tablet devices, email and print the estimate on the move and have customers accept estimates from site by capturing a signature.

Security
Commusoft has undertaken a huge upgrade across it’s mobile application in regards to security.  Instead of the simple ‘mobile settings’ options we previously provided the system now uses the more flexible role based security system, allowing far greater control over what you users/engineers can see and do.

The improved mobile experience is a huge part of our commitment to building the best job management system possible.  We see an ever shifting trend in the Plumbing, Heating, Gas and Electrical industry towards simpler mobile working.  Small businesses want to reduce their administrative costs while providing better services to their customers and tools like the iPhone, iPad, Android phone and Android tablets are helping them achieve this.