Business Blog > How Do You Warn Your Team About Potential SLA Breaches? 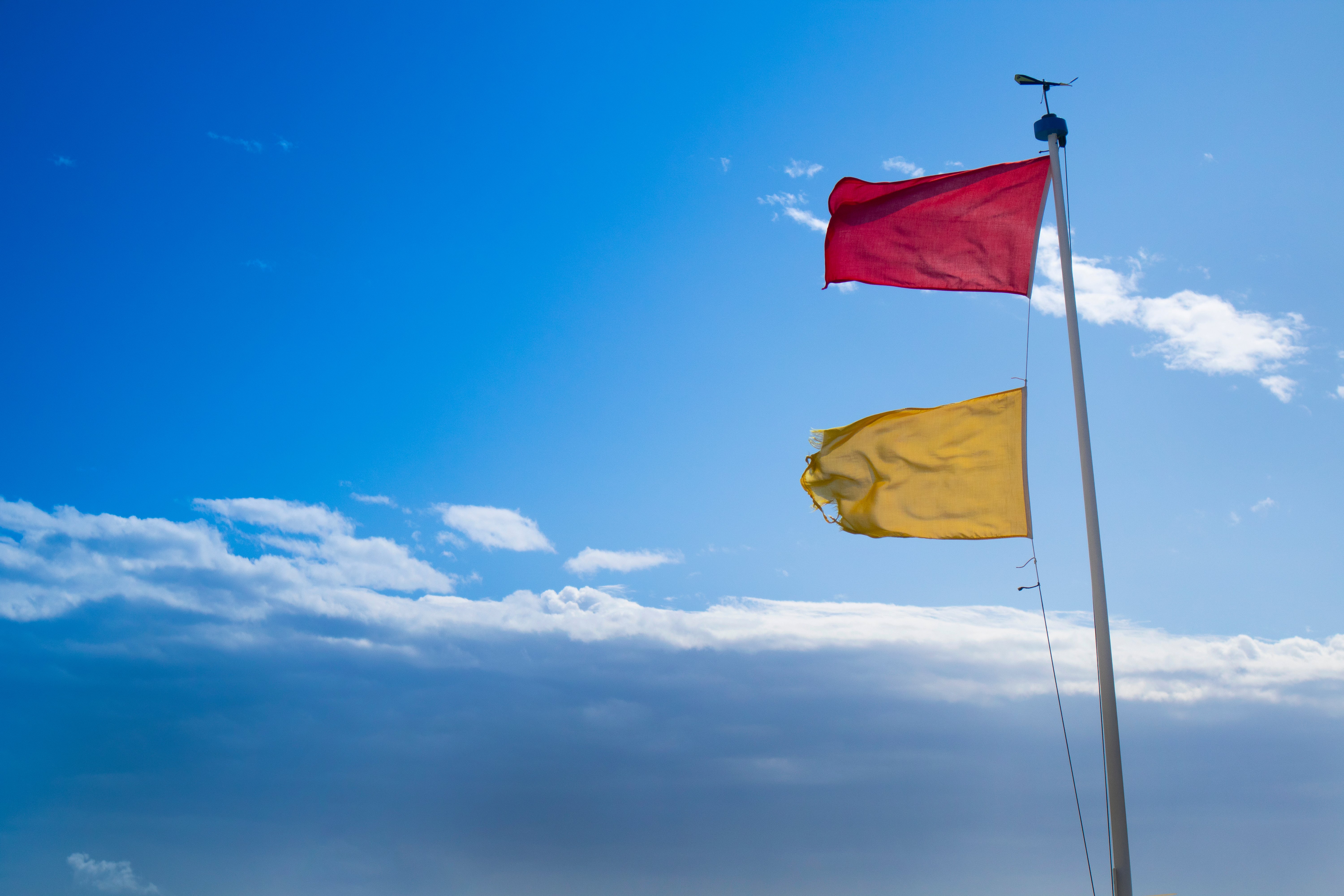 How Do You Warn Your Team About Potential SLA Breaches?

Dealing with an emergency is not easy, especially if you’ve had no warning. You might find yourself panicked, scrambling, or even make matters worse by implementing an ineffective solution...

We can agree, then, that if you’re able: it’s always good to get some warning.

After all, when it comes to upholding your SLAs, you know that a breach brings consequences, so you need to keep on top of them as best you can. Whether it’s a potential fine, or disciplinary action against your business, you don’t want to face these things if you can help it. The good news though, is that you most certainly can.

Now, it’s all well and good to talk about the need for warnings, but the problem you're facing is how to actually provide those warnings to your people.

It’s safe to say that if you’re reading this, you’re likely overseeing a large team and struggling to consistently provide them with the information they need, as soon as they need it. This can be especially frustrating because you’re also dealing with time-sensitive workloads, whether they be emergencies or delicately scheduled appointments.

In short: you adopt an automated solution. Of course, you’re here to get more detail than that, so fear not! First and foremost, we’ll take a look at just what the risks of a breach are, then we can consider how best to prepare for and resolve them with automated solutions.

1. What’s the risk of breaching an SLA?

So that you can make sure you’re prepared to deal with a problem, you need to understand the risks involved with an SLA breach. SLAs carry consequences (such as the cost of a fine), and these will have been discussed with your customer-most likely during tender-and be written into your contract.

However, there are other consequences you might face if SLAs are breached. These are less tangible than a fine, but awareness of them will help in your efforts to prevent them too (as we’ll see in section 2):

The most likely result of breaching an SLA is that you’ll incur a fine. Depending on the severity or frequency of a breach, these fines will vary.

It goes without saying that you want to avoid fines, as any financial outgoings that aren’t necessary expenses are going to negatively impact your cash flow and the profitability of your business.

If these build up, whether resulting from negligence or (more simply) poor tracking and monitoring, then your business will be needlessly suffering. After all, you know your margins and while you’ll have strategically planned with some room for error, losses incurred in this way are simply unacceptable, particularly as such losses extend beyond the financial (as below).

If maintaining SLAs to the standards expected becomes increasingly difficult, you may be faced with a bigger problem than a fine. Repeatedly failing to deliver the expected level of service can be an indication to your customer that your business simply isn’t up to scratch.

They may become frustrated if they’re constantly seeing that engineers are late, that jobs take too long to be confirmed, or cause them down-time that affects their own business in a negative way.

As a result of such stresses on their own business, they may wish to reassess their agreement with you and, in the worst cases, have legitimate grounds to terminate their contract with you.

If you consider the cumulative impact of successive fines with a resulting loss of a contract, it can become a massive problem for your company to deal with, and be difficult to pull yourself back from, as well as damaging your reputation…

Businesses talk to one another and with online reviews becoming an increasingly popular method for customers and prospective partners to review businesses (think GoogleMyBusiness, or sites like Checkatrade), the last thing you need is for a string of negative reviews to surface online.

The best way to avoid negative reviews or damaged relationships is, of course, to deliver a good service and keep the customer happy. That said, bad reviews are still bound to happen from time to time, but if you’re not completing work to the standard that is expected (and, indeed, that you’re contracted to), then it can be damaging.

This can work against you when it comes to tendering for new contracts, and, in even more dangerous scenarios, could even make other customers question think about leaving to join a competitor, too. It can be a dangerously slippery slope...

2. How can Automation solve these problems?

Now, let’s take a look at the solutions. We can’t promise that automation of your SLAs will keep breaches down to 0. While that would certainly be ideal, it’s highly unlikely. After all, mistakes happen, emergencies can be difficult to handle, and some things will simply be beyond your ability to control.

In most cases, automating communication is really about (perhaps somewhat ironically) taking you out of the equation: eliminating the need for you to be involved at all. At the very least, it lets you rely on software to take care of a mundane (but important) task, so you and your staff can focus on the more important tasks to hand (like actually speaking to a customer).

Ultimately, automation will save you time on the administration side of things, such as sending notifications, updates, and confirmations; it also sets a standard to messages, ensuring consistency and clarity, amongst other things.

When it comes to SLAs, these points are of particular note:

i. Visual countdowns and timers on the job description

Humans are visual creatures, with over half of our brain’s usage committed to consciously and unconsciously deciphering the world around us. It makes sense, then, that we respond very positively to visual cues and alerts. For SLAs, being able to visualise them makes it clear and memorable for the viewer, creating awareness of: the SLA itself, its status, and the time remaining. This can be a massive help, allowing staff to keep track with ease.

A good piece of automation software will integrate with your job management system, marrying up your data to make it both accurate and easily accessible. For example, for engineers out in the field they can view these details via a mobile device, or staff back in the office can track it easily on their computer system.

Below, you can see a visual example of Commusoft’s own SLA tracking feature, which is a great representation of sort of visual tracking you might be after. At a glance, the traffic-light-style colour-coded-system shows you what’s completed (block green), what’s nearing breach (yellow), or what’s actually breached (block red). 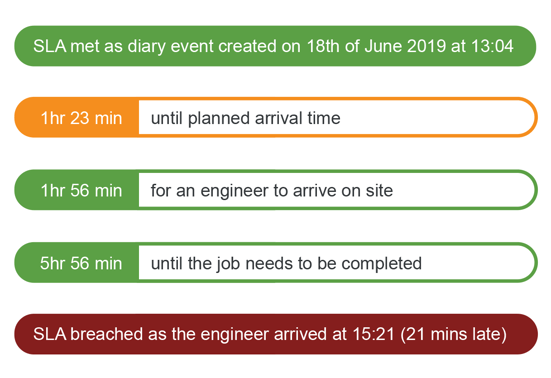 Alongside that, times are included with a live clock to the SLA countdown. Again, all it takes is a quick look, without having to dig through menus and more, to tell where you’re at and keep engineers up to speed.

Combined with visual cues come notifications and warnings; it’d be no use tracking them if you weren’t able to do anything useful with that information afterwards.

As such, depending on the automated solution you go for, these notices may be audible, visual, or both; either way, they help ensure the best response times by creating awareness about the status of an SLA, in real-time.

After all, if an SLA breaches, you’ll want to hear about it. Of course, the whole point of this is so that you know before a breach occurs as well, so Automation can be set up to help with that too, thanks to automatic notifications.

Notifications could be set up for the following criteria:

Whether to the engineer, the operations manager, office staff, or even to the customer, these notifications are a great way to give the relevant people the heads-up they need, all without them having to check-in for themselves. This saves time on having to chase details and, in the case of status notifications, gives engineers a nudge or indication of how they’re performing.

SLAs are a useful way to keep track of how your service is performing, and successful implementation will depend a great deal on how well you’re able to monitor them, day in, day out.

By using software to monitor your SLAs you can track, notify, and update about them 24/7, 365 days a year, often without having to give the process a second thought.

It's true that automation might take a little time to implement, but if that's the case, we've got a simple tool to help you keep track of SLAs in the meantime:

Bring Your Own Device: What is BYOD and Why is it Important?
Field Service Automation: What is a Workflow Engine?
How Automation Has Altered The Field Service Industry Landscape